Source: ‘Africa must pace up diamond value addition’ | The Herald 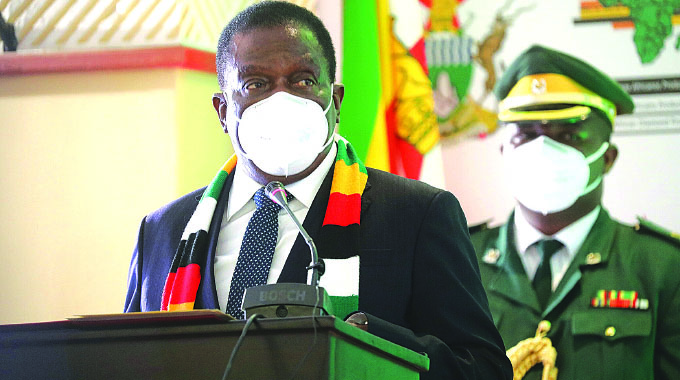 PRESIDENT Mnangagwa has called on African diamond producing countries to increase beneficiation and value chain development for them to become major producers of diamond jewellery and other accessories, given that the continent produces 60 percent of the world’s gemstone.

To this end, he said efforts must be made towards establishing Africa as a hub of the diamond cutting and polishing industry.

The President said time was ripe for Africa to begin consolidating its footprint in the global diamond industry, urging African diamond producers to scale up their activities towards ensuring that the diamond mining sector plays its part in addressing the socio-economic needs of African countries.

Zimbabwe has set a target to achieve a US$12 billion mining industry by 2023, with the diamond sector contributing US$1 billion, a clear reflection of the importance of diamond mining as a key mineral towards the national vision of becoming a prosperous and empowered upper middle income society by 2030.

The mining sector is one of the economy’s key productive sectors expected to account for the largest contribution to Gross Domestic Product (GDP) growth in the short to medium term.

Officially opening the extraordinary meeting of the Association of African Diamond Producing Countries (ADPA) and Council of Ministers Conference in Victoria Falls yesterday, President Mnangagwa said the present global realities should give impetus to African diamond producers to scale up their activities towards ensuring the diamond mining sector plays an integral role in addressing the socio-economic challenges in Africa.

ADPA has 18 member States and its headquarters are in Luanda, Angola.

Zimbabwe is the vice chair and will take over from Tanzania, the current chair.

Harare is also deputy of the Kimberley Process Certification Scheme (KPCS) and will take over chairmanship of the global diamond watchdog next year.

The President said the mining sector was a contributor to world economic development and also the largest foreign currency earner for most developing countries, especially those in Africa.

“In view of the rich natural resource base on the African continent, the mining sector has a duty to be the catalyst in the transformation, competitiveness, socio-economic development and growth of our African economies,” he said.

“As we convene at this conference, we must therefore be mindful of our collective aim of ensuring that the sector significantly accelerates the prosperity of the people of Africa.”

The President said in line with the conference theme, “Organisational and Structural Reforms of the Association of African Diamond Producing Countries”, there was need for stronger, coordinated and harmonised laws and policies.

“As you reform, I challenge the association and indeed the sector, to think in big picture terms. Cross-sectoral linkages must be pursued for the advancement of the industrialisation and modernisation of our countries.

“The growth of the sector must translate to, not only job creation, but the modernisation of infrastructure such as roads, railways, housing, water and sanitation among other amenities. Corporate social responsibility projects in the traditional sense are now inadequate,” he said.

“Players in the mining sector and those in the diamond mining subsector in particular, must seek to advance science, technology and innovation in our education systems, enable the achievement of universal health coverage, facilitate increased production and productivity in agriculture for food security as well as promote entrepreneurship among the youth and women,” he said.

As African leaders, said President Mnangagwa, they remain seized with the implementation of cross-border infrastructure projects such as energy generation and transportation networks for the growth of all sectors of their economies, including the mining sector.

“I urge you to continue strengthening cooperation with regards to laws, policies and strategies concerning prospecting, mining, production, cutting and polishing of our diamonds.

“In addition, we must build our internal capacities as an association to develop and uphold best practices, which are, albeit, informed by the realities of our countries.

“Greater information sharing between member States of the Association of African Diamond Producing Countries should progressively result in us having a louder and more effective voice in the affairs of the global diamond mining sector,” said President Mnangagwa.

The President said the continued exportation of raw diamond was a misnomer, especially in view of the fact that Africa produces about 60 percent of the world’s diamonds.

“African diamond producing countries should now increase beneficiation and value chain development so that our countries become major producers of diamond jewelry and other accessories.

“This is long overdue. Now is the time for us as Africans to begin consolidating our footprints in the global diamond industry.

“To this end, all efforts must be made towards establishing Africa as a hub of the diamond cutting and polishing industry,” he said.

The President challenged African governments to put in place mechanisms and the requisite resources to build infrastructure, skills and a crop of qualified diamond industry artisans within their jurisdictions.

Further, he exhorted the association to promote the harnessing of new technologies, the African entrepreneurial culture and youthful human capital to maximise Africa’s potential as diamond producing countries.

“Equally, the investments in research and development should be given due attention. As Africa leapfrogs its modernisation and industrialisation towards the realisation of the African Union Agenda 2063, sustainable development remains critical,” he said.

President Mnangagwa said the ADPA must also take greater strides to craft and implement comprehensive and collaborative frameworks which regulate the environmental impact of diamond mining.

He said mining houses must be compelled to extract the mineral resources in an ecologically sustainable manner.

“In this regard, the restoration of former mines for other commercial ventures must be pursued vigorously. I also encourage us all to continuously improve transparency, accountability and stakeholder involvement within the diamond mining sub-sector for the ultimate benefit of our people and countries,” he said.

He said Zimbabwe stands ready to play its part towards advancing the aspirations and objectives of ADPA.

“Together as African Diamond Producers Association, let us strengthen our institution and unreservedly lobby with one collective and united voice for the growth of the African diamond mining sub sector,” said President Mnangagwa.