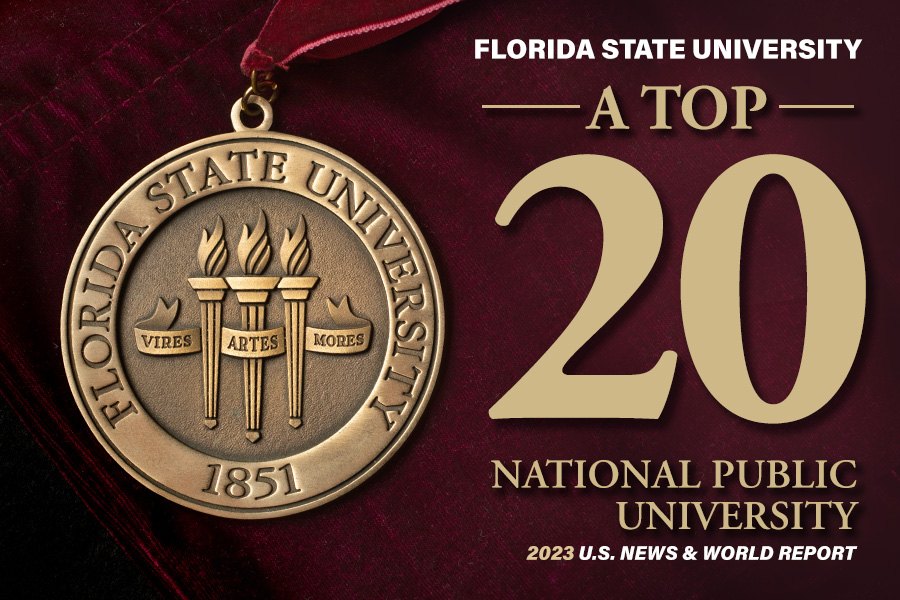 Florida State reaffirmed its No. 19 spot in the rankings, appearing in the Top 20 for the fourth consecutive year. The university also held steady at No. 55 among all national universities, both public and private, and ranked as the No. 8 Best Value College among public institutions.

“These rankings reflect total excellence across the university,” said President Richard McCullough. “We’re competing at the highest levels with the best universities in the world, and our goal is to continue to rise to the Top 15 and beyond.”

Provost and Executive Vice President for Academic Affairs Jim Clark credited the perseverance and resilience of the campus community for continuing to strive for excellence despite the challenges of the past few years.

“Florida State University’s recognition as a Top 20 public university is a result of the unwavering commitment by our faculty, staff and students who have worked tirelessly to firmly establish us as one of the nation’s top institutions,” Clark said. “There are hundreds of people on our campus who work every day on particular types of issues and challenges in order to reach this kind of achievement.”

Florida State’s stellar graduation and freshman retention rates continue to power the university’s standing among the nation’s best. FSU placed No. 18 among publics in the metric, rising six spots from a year ago.

“These rankings reflect total excellence across the university. We’re competing at the highest levels with the best universities in the world, and our goal is to continue to rise to the Top 15 and beyond.”

The university also maintained its Top 20 ranking in graduation rate performance at No. 19 among public universities. This measure compares actual graduation rate and predicted rate, which U.S. News calculates based on the university’s resources and student profile.

“We’ve done a lot of great things when it comes to student success, and we’re continuing to invest a lot of resources in these areas,” McCullough said. “Our faculty and staff are dedicated to making sure every student who comes to Florida State has a chance to graduate, regardless of their background, and we’re very proud of that.”

FSU posted its highest-ever score in the peer assessment metric, which carries a weight of 20% in the U.S. News scoring methodology — evidence that the needle is moving in terms of the university’s national reputation.