September 20, 2022 (Poway) — “This is probably going to be one of the biggest years ever,” said John LoPiccolo, the Poway Symphony Orchestra’s Music Director and Conductor, as he addressed the August gala floor below him crowded with musicians, supporters, city councilmembers and fans.

Every eye in the room was trained on him as he stood halfway up the stairs in the sun-drenched lobby of the Poway Center for the Performing Arts, where he was due to announce the group’s 2022-2023 programming.

“We’re bringing top, I mean at the very top quality of guest artists,” he said excitedly. “People that the San Diego Symphony would have trouble getting. And I say that in all honesty and humility.” 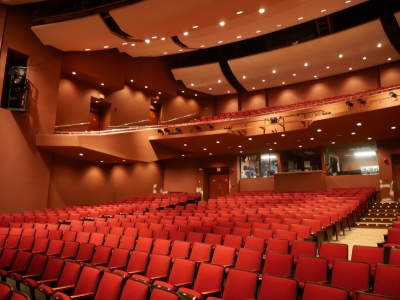 Founded by a partnership with the Poway Unified School District in 2004 by violinist Ulli Reiner — who is now the group’s Concertmaster — the 65-member semi-professional Poway Symphony Orchestra (PSO) provides a hub for classical music culture not found for miles. Likewise, their concerts attract listeners and performers from across San Diego County and beyond.

Since 2015, the group has also operated under a non-profit status, and is now overseen by a Board of Directors led by Bo Matthys.  According to him, the orchestra and its home at the Poway Center for the Performing Arts (PCPA) are a “feather on the cap” for the City of Poway. He remembers with gratitude how the group still received donor support in 2020 and 2021 despite not being able to perform during that time of the pandemic.

“An orchestra is not just musicians, it’s not just donors, it’s not just the venue,” described Matthys at the gala, which was intended to bring fanfare to the announcement of the new program, plus awareness and support to the group. “It’s all these things together. So that’s why we’re here.”

The gala was led by Ellen Marciel, PSO’s Operations Manager, and included raffle prizes, food and drink, and gifts to attendees. After about an hour of mingling, she brought LoPiccolo up the stairs and introduced him so that he could finally share with the attentive audience the main attraction: the details of three contrasting and high-caliber concert programs to take place over the next three seasons. 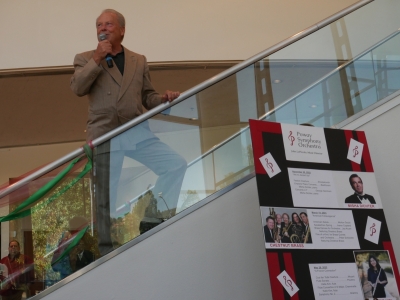 On November 20, PSO will proudly feature Misha Dichter, a pianist of world renown and critical acclaim especially for his treatments of Franz Liszt.

“If you’re not familiar, look him up. He’s a genius,” advised LoPiccolo, who first met Dichter 40 years ago. “And he’s going to play two concertos, which is unheard of.”

Several new orchestra members will also take the stage at this opening concert.

The next concert will be on March 19, when PSO will offer music for a five-part brass ensemble and orchestra, a rarity in classical music. This program will feature the Chestnut Brass Company playing music by all American composers, including from one of their own members.

The third and final concert of the new programming will take place on May 28, with PSO’s principal flutist Katie Kim performing as the featured soloist. Kim is still a new member to the group and has only performed in one of their concerts so far, but she has already proven her immense talent.

“A standing ovation at intermission never happens,” asserted LoPiccolo, recalling Kim’s reception at their last concert. “That was my first.”

LoPiccolo, a self-described semi-retiree, accepted the position with PSO back in 2014. Under his direction, the orchestra is composed of some professional musicians, such as Jerry Folsom, a former principal french horn player of the Los Angeles Philharmonic. Yet PSO also includes a large number of corps members, who pay to play with the group. With this structure, ticket prices can be lower, and more resources can go towards booking guest artists for concerts akin to the upcoming schedule.

“It takes some extra money to bring in these people,” said LoPiccolo. “But the same pieces played by another orchestra would be a lot of money. And we want to keep it so that all of you can afford to come and bring your friends. That’s what it’s all about.”

LoPiccolo remembers a time when PSO did not even charge admission for its concerts, and marvels at its growth into a celebrated tradition. Each of the upcoming shows will be performed at 4 p.m. on Sundays in the state-of-the-art PCPA concert hall with tickets first on sale about six weeks before the concert dates. For the full program details and more information on PSO and the PCPA, visit https://www.powaysymphonyorchestra.org/home.

“I am so looking forward to seeing you,” LoPiccolo told the gala’s audience as he finished his announcement of the program. “Please, please talk it up. This is big time.”

Previous articleHow to Evaluate Machine Learning Models using TensorBoard with TensorFlow
Next articleTrump claimed he did a ‘great job’ with COVID and said the only thing Dr. Deborah Birx did well was scarves, book says