In order for us to “validate” if what we are doing in the mod is on the right track, we invited a fan to playtest our mod and share his insight (so we don’t stay in our own bubble). We have chosen Matt, who eventually became our official beta tester (among helping us with other things). Below you can see his review (which was written after his first playthroughs) and a nice video of a playtest. Enjoy!

There is a new modification for the BFME series currently under development. It is called the
Wars of the Firstborn and is based on the old Ridder Clan mod by NewErr and team. I was
fortunate enough to be asked to beta test the mod, and will review it here. I’ll break this up into
sections for each portion of the review.
As the name suggests, the mod focuses on the “firstborn” Elves of Middle Earth. The other
factions from vanilla ROTWK are also present (minus Angmar and the Goblins), but here the
Elven realms take center stage. One can play as either the High Elves (Rivendell and Lindon) or
as Mirkwood, which will be the topic of the review.

First, I’ll review some general gameplay differences in this mod from the vanilla game and other
mods out there. The primary gameplay difference is in the voting system that has been
developed. Here, players get to pick between BFME1/2 playing style (build plots or builders).
Additionally, you can opt for or against having ring heroes (not a difference from vanilla). The
last gameplay difference, and one of my favorites, is the ability to play in deathmatch mode.
Here, all players start with 100k resources, including the AI. It’s a fun gameplay style that is
reminiscent of the old school Age of Empires deathmatch mode that makes for longer, epic
matches (but beware that this could cause some gameplay lag).

The game itself is paced similarly to vanilla ROTWK. One thing that I particularly liked about this
was that this means the AI difficulty is also similar to vanilla. One can play against a medium
level AI and enjoy a decently paced, fun match. While I haven’t played against Hard, I imagine
that it will be similar to ROTWK, as well.

The maps in the mod are currently the vanilla maps, along with a handful of custom maps by
OswaldCobblepot. The maps he contributed are incredibly well done, and he has recreated the
“dark forest” vibe that is present in places such as Mirkwood effectively. You do get the sense
while playing that there could be giant spiders just lurking around the corner. Another interesting
aspect to some of his maps are that one will need to adjust the camera/zoom angles in order to
better visualize the action, thus making the gameplay immersive. This is a double-edged sword,
however, as some may prefer to maintain the bird’s eye view of combat (which I do find myself
preferring more often than not), however the different camera angles do make for some quality
screenshots.

Playing as Mirkwood offers up a unique strategy and gameplay compared to renditions of
Mirkwood in other mods. Basic infantry are recruited by constructing buildplots on the main
fortress and include archers, swordsman, and pikeman. They come equipped with light armor
initially, making them quick scout troops that deal high damage to those around them. The
player can choose between two additional armour sets for medium/leather armour and
heavy/brass armour, each offering their own pros and cons compared to the basic armour (for a
full explanation of these, see the faction plan that has been published). It should be noted that
once an armour set is chosen for a battalion, it can’t be undone, forcing the player to make a
decision on their playing strategy. Units can also receive Doriath Fletching for archers and brass
forged blades for swords/spears to deal additional damage. The detail that has gone into the
soldiers is phenomenal, and care has been taken to ensure that this rendition of the Woodland
Realm’s army is unique. My primary critique is that there is no basic/entry level calvary, calvary
are only recruitable via the Mirkwood Lieutenants.

These specialized soldiers, recruitable from the Chamber of the Watch, form Mirkwood’s elite
soldiers with the Palace Guards. Lieutenants, for a price, are used to recruit certain different
units for Mirkwood. The first is they are able to summon Mirkwood’s calvary, as well as a
battering ram to contribute to siege damage. Their other summon is a cart with food and
supplies which heals units in battle (similar to the Dwarven battle wagon with a hearth from
ROTWK).

The Palace Guards are the most elite soldiers in the faction. To get them, one must have
Thranduil at Level 5, and both brass armour and brass bladed researched. One can recruit up to
three battalions (an additional one is available when Thranduil reaches levels 8 and 10, I
personally think the faction would be better if they are recruitable at Thranduil levels 1/5/10 ).
They have the ability to mount and become calvary at level 1. At level 3, they are capable of
debuffing the enemy by decreasing speed and armour. At level 7, they get a boost to their
footspeed, and on horseback they have less deceleration when trampling units. At level 10, they
get a passive ability that reflects enemy damage and resists knockback attacks.

Mirkwood also has powerful heroes in Legolas, Tauriel, and Thranduil (Radagast and Galion are
coming, too). Legolas at level 1 can switch between his bow and knives, and has the vanilla
Twin Shot ability. He also has a new level 1 ability with his knives called Swift Justice that grants
a damage bonus. As he levels up he can grant experience to nearby units (levels 4/7), increase
his vision range and detect stealth (level 7 Elf Eyes), and at level 10 can use the vanilla
Windstorm attack and also Bladestorm to cause knockback damage to his foes in knife mode.
Tauriel can also toggle between bow/knife. At level 1, she is able to reduce enemy hero armour
with Crippling Bow, and Wounding Arrow reduces the damage caused by enemy heroes. As she
levels up, she can use Daughter of the Forest for stealth and increased speed (level 3), pin an
enemy hero to be barraged by archers (level 6 Encircle), allow allies to be stealthed (Captain of
the Guard, level 7), and at level 10 can leap to an enemy hero and deal additional knife damage
(This is our Fight).

Thranduil is an equally powerful hero. At level 1, he grants fear resistance to his soldiers
(Elvenking of Mirkwood). This buff becomes stronger as he levels up to include increased
damage and armour to troops and decreased ability recharge for nearby heroes. His level 3
ability (Eradication order) can be used to reduce the armour and damage of enemy units, and at
level 5 he can summon two battalions of Mirkwood Wardens (spearman) in heavy armour (they
get brass blades when he is at level 10). Level 5 also allows him to recruit Palace Guards and
don his heavy armour.. At Level 8, Ribo i Thangail allows all allied units resistance to siege
damage and activates their heavy troop formations. HIs level 10 ability, We will Endure, further
increases the strong buffs from Elvenking of Mirkwood, and he deals more damage/becomes
resistant to magic damage.

One change I enjoyed compared to vanilla ROTWK and other mods is how the Mirkwood
economy works. The player builds a glade tree, which comes with one build plot for either a
Woodworker, Tailor, or Metal worker guild. Building one of these adds command points and
generates resources. Additionally, armour and weapons upgrades as well as upgrades for
strengthening buildings are researched at the economy buildings. The tree itself can be
upgraded twice to receive up to two more economy structures. What is interesting is that the
economy buildings obviously do not have the vanilla radius for resource production, which
makes generating resources an easier process.
Another improvement in Mirkwood for this mod was the addition of walls (classic BFME2 style
but redesigned for the Elvenking, complete with upgrades such as gates, wells, and arrow
towers) and telians (which function as platforms for archers).

My primary critiques for Mirkwood as a whole are that they do not have basic calvary forces.
This next critique is a bit nit-picky, but I personally feel that the speed reduction for heavy
armoured troops is also a bit too much, and they could use a bit of an extra speed boost.
Another critique are that economy buildings can be leveled up to 2 by purchasing the upgrade to
Level 2, however they must reach level 3 the vanilla way by accumulating resources overtime
and researching upgrades. I think that both level ups should be the same (my preference would
be for them to upgrade by purchasing the level up). I’ll also note that, while a unique take on
economy in the BFME series, a match could be unbalanced if there is not a break on
Mirkwood’s resources that causes them to produce less the more resource buildings you make
(similar to how building too many farms or mallorn trees in vanilla caused each one to produce
fewer resources. While I do enjoy this while playing as Mirkwood, I could imagine it would make
them a tad overpowered if one were playing against Mirkwood).
All in all, this mod has been fun to test play. It is well done and well executed, and once finished,
will be one that every player of the BFME series should have in their repertoire. 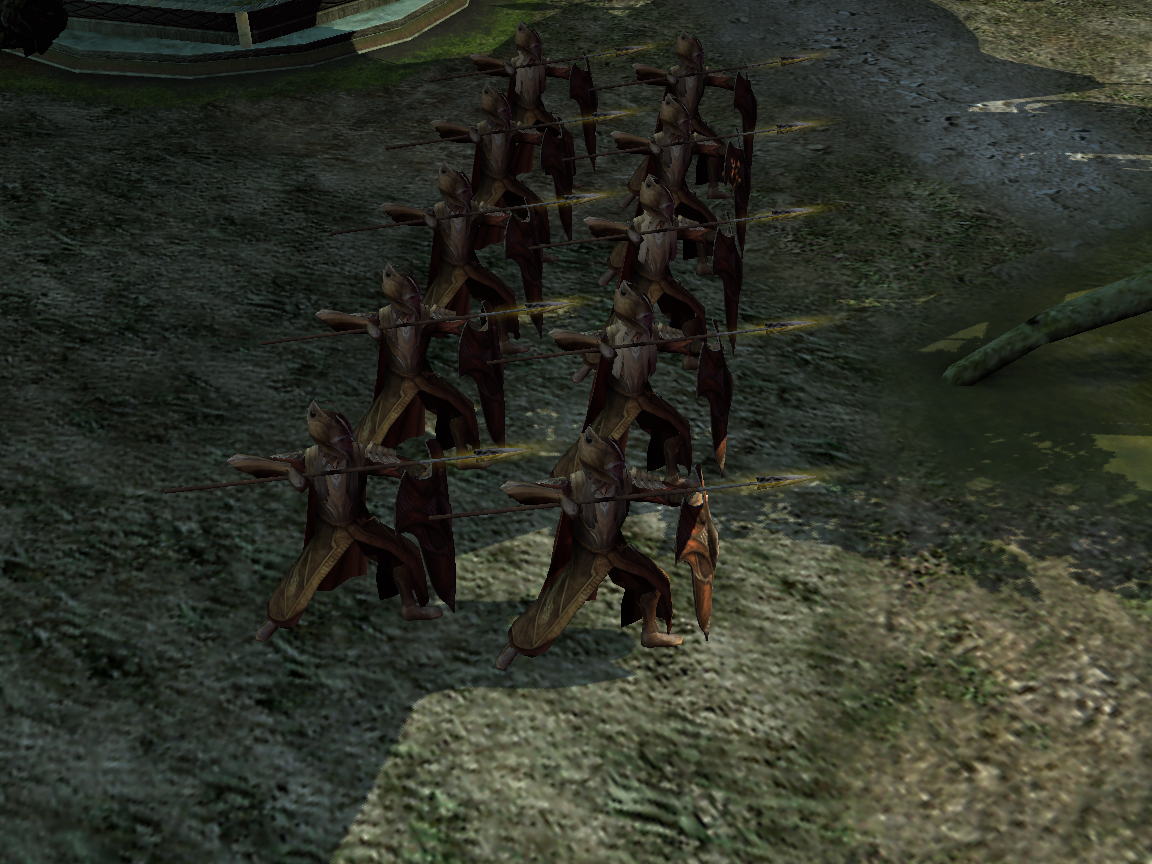 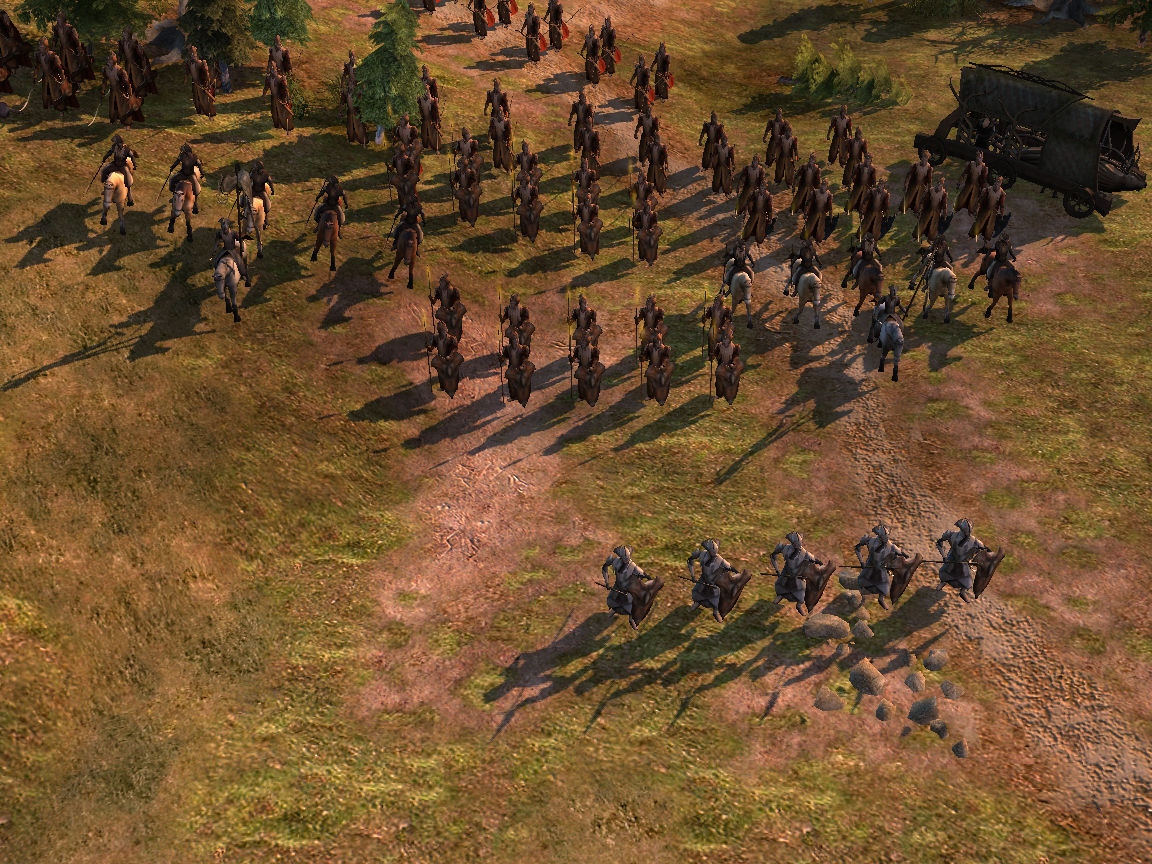 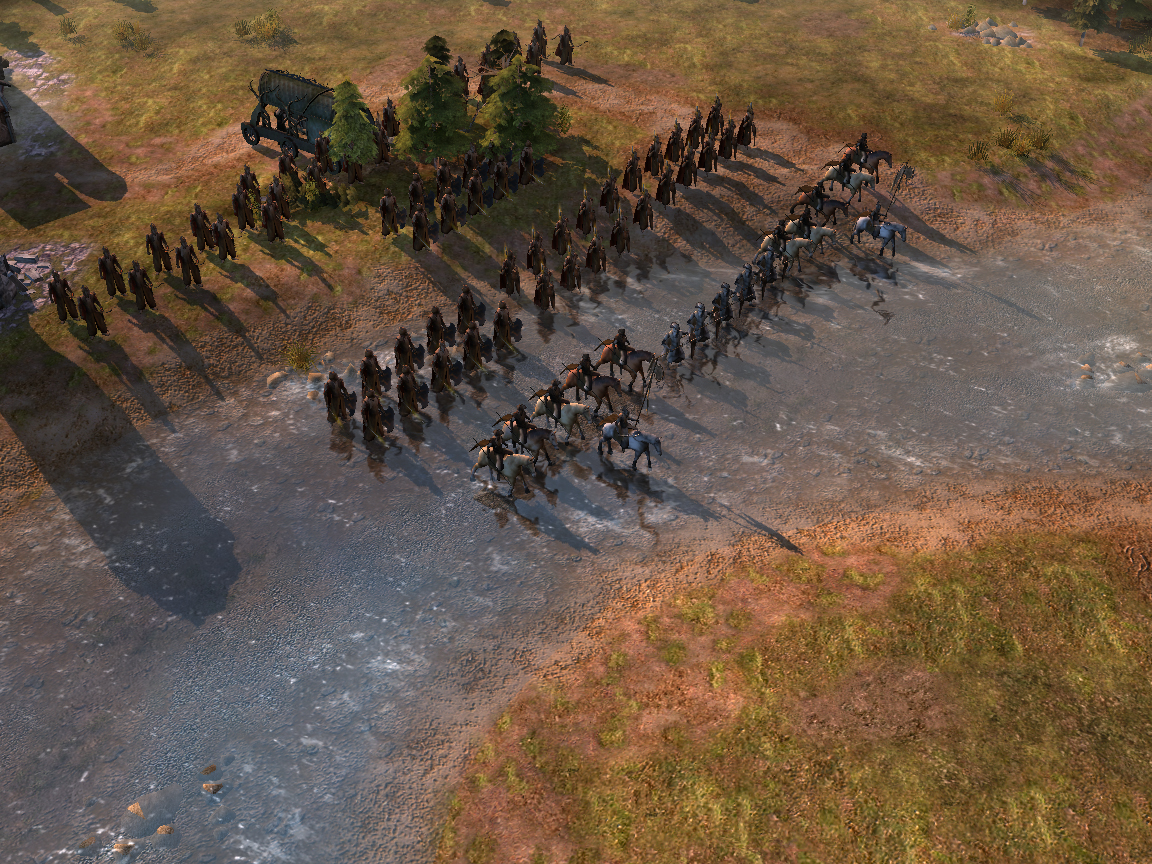 The Elvenking’s army is waiting for the signal to attack 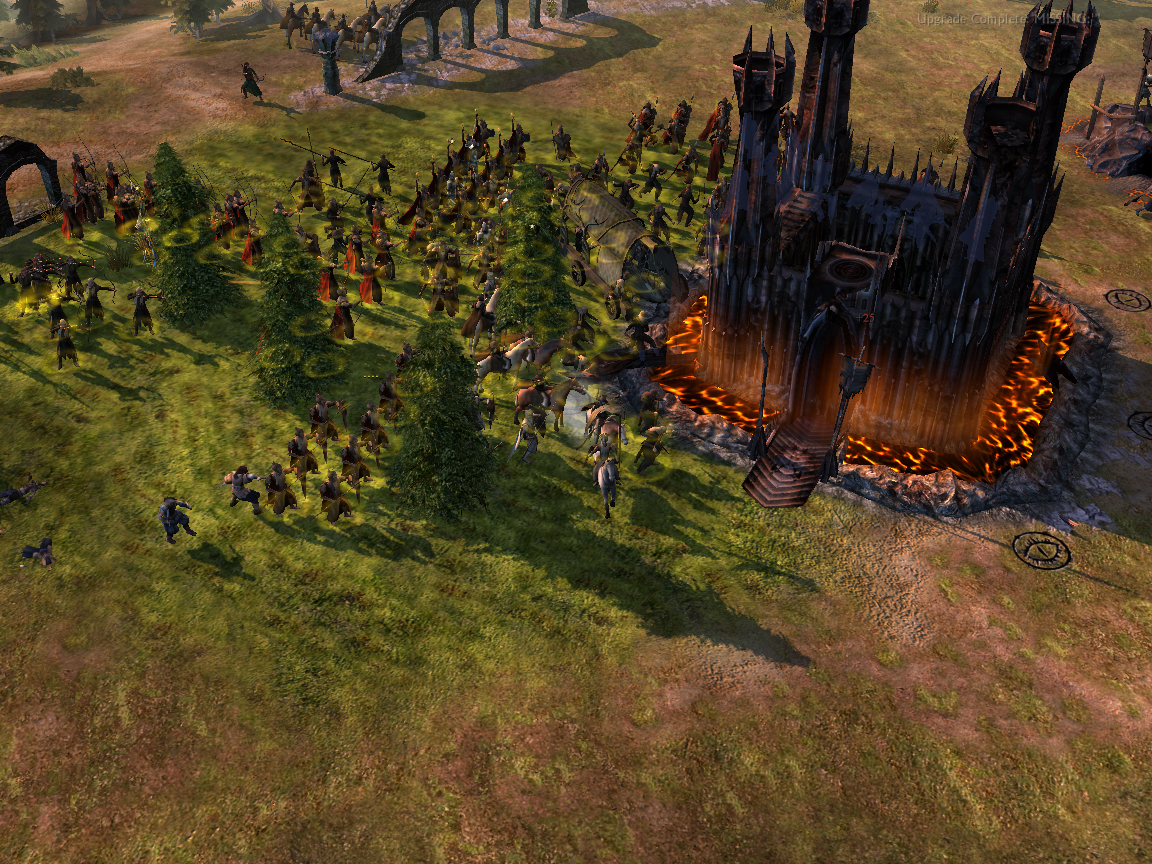 Thranduil has led his forces to victory over Mordor 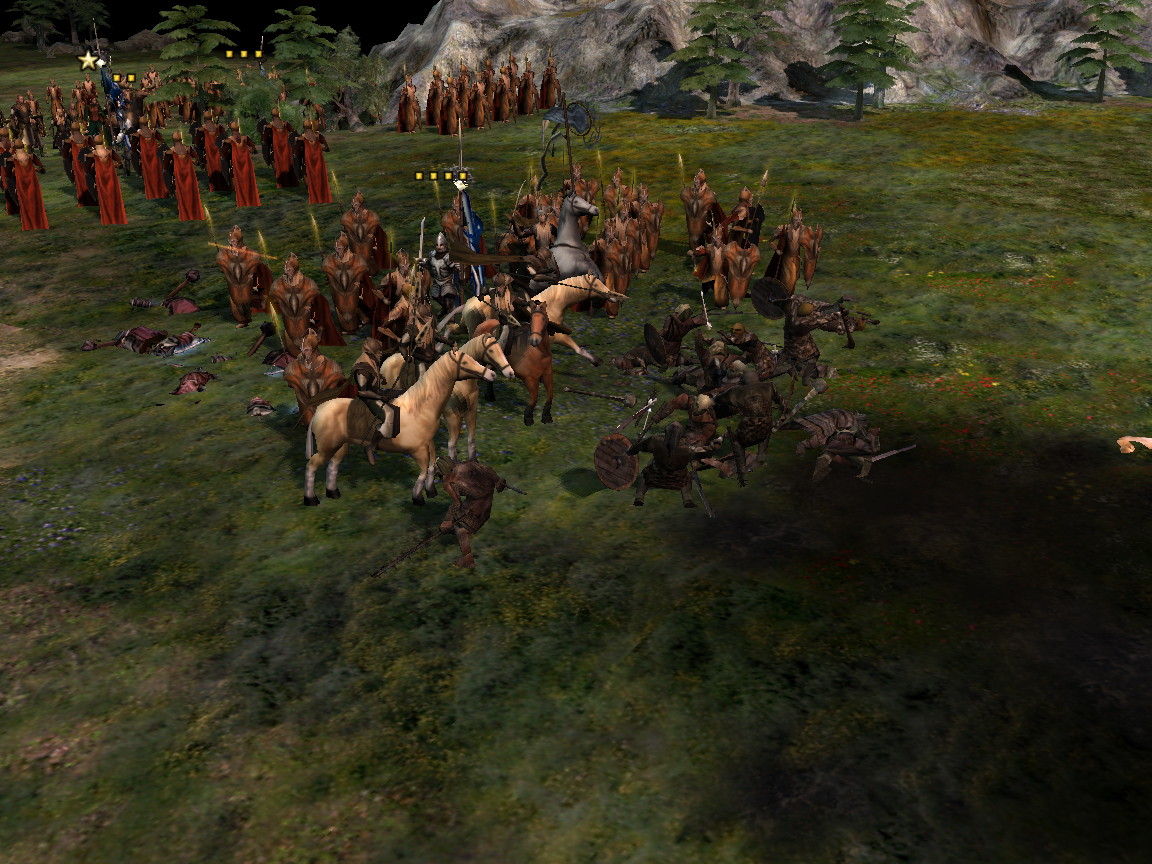 You can have a full playthrough here!

Keep in mind that certain things might change during development. You can share your thoughts and feedback in our discord channel you can find the link on the main moddb page or at the bottom of this article. Also, we share there bonus stuff in the #sneak-peek channel for the very curious ones.

Sincerely,
NewErr and the Wars of the Firstborn team

Previous articleOpinion: Tech earnings are about to dive, and there’s no life preserver in sight – MarketWatch
Next articleTrump defends Saudi’s oil price hike: They have ‘been treated badly by the United States’