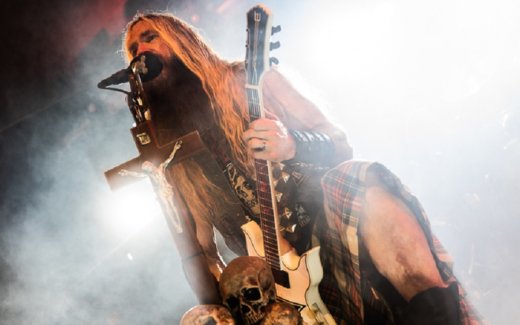 We’re less than two months out from the first handful of scheduled Pantera shows down in Mexico and Latin America, so you’d expect surviving members Phil Anselmo and Rex Brown would at least begin jamming out a prospective setlist with Abbott brother stand-ins Zakk Wylde and Charlie Benante. After all, all this talk of “legacy” and being a “tribute” to the band’s iconic output has set some pretty hefty expectations since it was first announced back in July.

Yet in a recent interview on The SDR Show (transcribed by Blabbermouth), Black Label Society frontman and pinch harmonic acolyte Zakk Wylde admitted that he’s not yet learned the expected Pantera material, even though he’s known to have been an extremely close friend of Dimebag’s.

Now, while that’s a fair statement to make, since you don’t simply learn complex guitar parts through osmosis or simply by being around someone as talented as Dimebag, it’s still a little concerning. The Pantera reunion/tribute/whatever shows are slated to begin early December and we’re now halfway through October.

Zakk is an extremely talented guitar player, so it’s within the realm of possibility that he could learn a few songs in short order, but we’re talking about the band quickly ramping up to become a headliner in 2023. There’s got to be some crunch or pressure building on Zakk to get those guitars down pat – especially since he’ll be using his old buddy’s gear and replicating his tone.

Speaking back on the whole “legacy” and “honoring Pantera” angle, Zakk also said in the interview that he felt “honored” to be the guy to stand in for his buddy Dimebag.

“I had nothing to do with [putting the Pantera thing together]. I’m friends with the guys. It’d be like if Noel Redding and Mitch Mitchell were gonna do a tribute to Jimi [Hendrix] and they [asked] Eric Clapton, ‘Eric, would you sing and play Jimi’s stuff? We’re gonna put this tribute thing together.’ It’s just, like, of course Eric would [do it]. ‘Just let me know when you wanna do it.’ It’s just like anything. Like when we do ‘Experience Hendrix’, we do anything like that, it’s just, like, ‘Would you guys like to go out and honor Jimi Hendrix?’ It’s just, like, ‘Yeah. And why wouldn’t we?’

“Yeah, of course. I’m gonna be honored. Even if it was a festival they were putting together and they wanted Black Label to come up and have Phil sing and they were gonna have all the different bands up there — Lamb of God, Black Label, Anthrax — and all the bands were gonna play a Pantera song and Phil’s gonna sing. Of course we’d be involved. Why wouldn’t we be involved?”

Again, we’re sure things are going to work out in the end, but knowing he’s not quite ready yet less than a month and a half out is still cause for concern.

If you’d like to try to catch Pantera live later this year, you gotta be in Mexico during the winter. The dates are below: