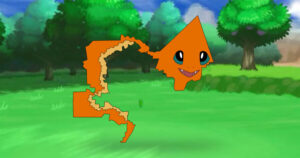 TOKYO — The Pokémon Company announced today that the new games Pokémon Scarlet and Pokémon Violet will introduce a new alternate Charmander evolution, Gerrymander, which will be totally unbeatable due to its ability to randomly change the rules of battle.

“Gerrymander can be obtained by trading a Charmander to another player while letting it hold a wad of cash from a political lobbyist in its hands, and once you do, you can literally never lose,” said Takato Utsunomiya, Chief Operating Officer of The Pokémon Company, in a surprise Pokémon Presents video broadcast on YouTube. “If you try to attack one with a Water type attack, for example, it will temporarily change the laws of physics with its special gerrymandering ability so that water no longer douses fire. Their vulture-like beak, stringy neck, and leathery devil-like wings may be frightening, but that should simply remind players of their fearsome strength and power in any situation.”

Players say they are worried that Gerrymander will throw off the balance of competitive play and make completing the pokédex a difficult endeavor in the series’ latest installments.

“It seems like you won’t be able to catch a Gerrymander in the wild because they will totally invert the mechanical function of a pokéball when cornered,” said Randall Fuqua, a top contributor to the r/pokemon subreddit. “And it seems like the only way to get political lobbyist cash is to actually do some wheeling and dealing in the Pokémon House of Parliament, which won’t even be available as DLC until next year at the earliest. At least Missingno broke the old games in a fun way, but Gerrymander feels like a pointed reminder that life just isn’t fair.”

Despite the outpouring of negative feedback, The Pokémon Company remains resolute that the creation of Gerrymander was a good idea.

“We understand that some players are upset about this new character, but according to a user poll that we just ran on our website in the five minutes since this special announcement, Gerrymander’s approval ratings are through the roof. We find it hard to believe that Gerrymander is the one to blame for the dissatisfaction of a vocal minority online, but we hope our fans stay engaged and continue to make their voices heard in the world of Pokémon for years to come.”

At press time, the Pokémon Company announced that they would make the completion of the pokédex easier by distributing Gerrymanders for free via Mystery Gift at select GameStop locations at only the wealthiest zip codes in America.

The post Nintendo Announces New Charmander Evolution ‘Gerrymander’ That’s Unbeatable Due to Its Ability to Randomly Change the Rules of Battle appeared first on Hard Drive.

Previous articleBiden, Xi to reset economic ties at Bali meeting – CSMonitor.com
Next articleDisney World budget tips: How to save on tickets, hotels and food – The Washington Post