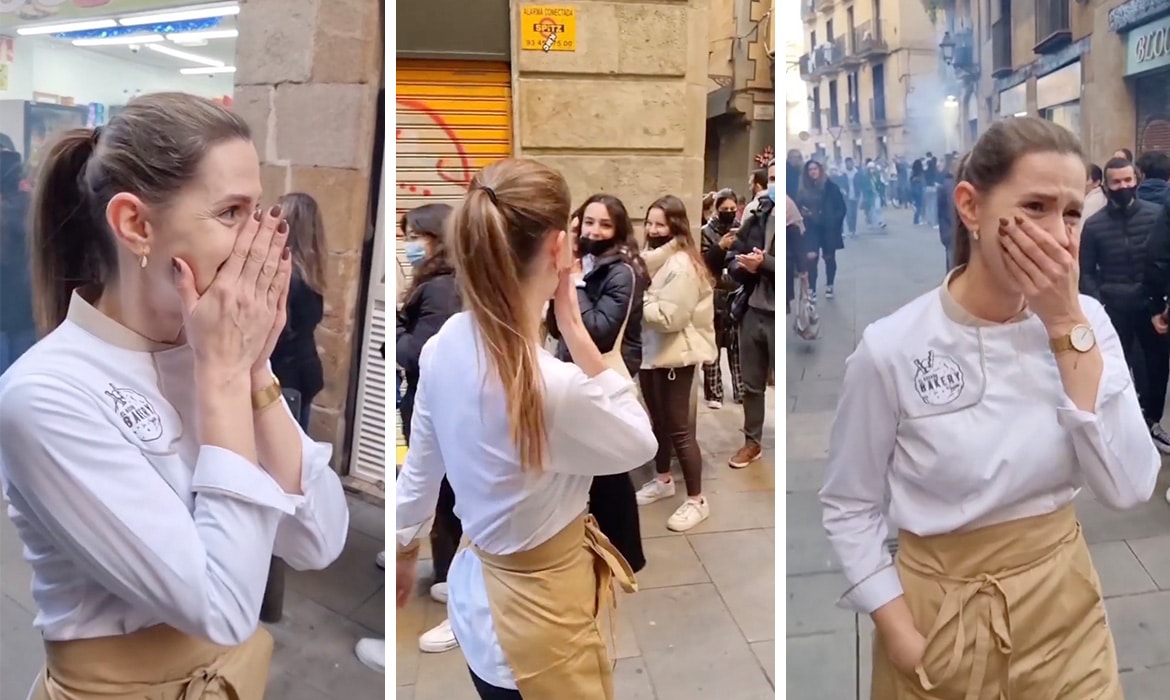 Chef Lucia Kuráková has had success with her restaurants in the past, but the support she has received on her latest venture brought her to tears. When Kuráková opened El Desván, her first restaurant, in Barcelona, she set out to introduce burgers to the city as more than just an unhealthy meal. Her burgers became so popular that she then opened a tapas restaurant, El Desván Vermutéria, where she introduced cakes to the menu. At this point, the Slovakian restaurateur began to pivot.

Kuráková’s sweets became so popular that she opened a separate business, El Desván Bakery, just for her confectionery creations. While it was only meant to be an add-on to handle the influx of orders, that too became so well-loved that in March 2022, she was able to open a second location. Partially due to her Instagram fame and also offering 1€ cookies on opening day, her second location had a huge turnout for its grand opening.

The video shared by the El Desván Bakery team went viral on TikTok and Instagram. In it, Kuráková smiles and opens the doors of her newest business and gasps at the line she sees. As she walks down the street, she hugs and shakes hands with various waiting customers. Eventually, she starts crying and covering her face. Many customers clap for her and wave to her. Kuráková says on Instagram, “Family! I’m speechless! It’s a dream come true because of you!” On TikTok, Kuráková highlights her long journey to multi-business success: “It’s five years of hard work but with a priceless reward! You are incredible!”

Scroll below to see Kuráková’s famous confectionary creations and watch her viral reaction to a busy grand opening.

Lucia Kuráková, a Slovakian restaurateur based in Barcelona, is known for creating delicious food, most notably her gargantuan burgers.

After adding sweet treats to her menu, she received such an influx of orders that she opened a separate bakery.

Kuráková’s bakery became so popular that she opened a second location in March 2022 and offered 1€ cookies on opening day.

Unsurprisingly, the line of waiting customers for the bakery’s grand opening was very long—and Kuráková’s reaction was priceless.

She calls her customers “family” and thanks them for all of their support.

READ: Baker Had the Sweetest Reaction to the Long Line on Her Restaurant’s Opening Day