Carly Simon’s hit 1972 single You’re So Vain starts with one of the best opening lines in pop music: “You walked into the party, like you were walking onto a yacht”.

This killer lyric helps set up the pretension and vanity of the subject of the song, as well as Simon’s kiss-off tone throughout.

It also ignites a mystery that has endured for 50 years, triggering endless debate, plenty of guessing, and even an auction to buy the answer to the mystery.

Who is this hit single about, and were they really so vain that they did indeed think the song was about them?

‘You walked into the party … ‘

New York-born Simon, who is being inducted into the Rock & Rock Hall of Fame this weekend, had been a professional musician for almost a decade and enjoyed a couple of minor hits prior to releasing You’re So Vain on November 8, 1972. By early January it was #1 in the US and on its way to going to #1 around the world.

The song, which Rolling Stone included in its 500 Greatest Songs Of All Time, remains the biggest hit of Simon’s career, though her smouldering Bond theme Nobody Does It Better is a close second.

You’re So Vain succeeds on its sassy melody and witty-yet-heartfelt lyrics, particularly the hook of “you’re so vain you probably think this song is about you”, which stands out amid a string of great lines.

Simon’s performance is both strident and fragile — check out the way she sings the line “But you gave away the things you loved”, and then pulls within herself to deliver the heartbreaking follow-up “and one of them was me”.

It’s sublime stuff that none of the dozens of unworthy covers delivered — not Chocolate Starfish’s Aussie chart-buster, not shock-rocker Marilyn Manson’s take, and especially not UK band Smokie’s version with its misheard lyrics which replace the French term “gavotte” with “go by” in the first verse.

Simon’s band, which includes Derek & The Dominos drummer Jim Gordon and Beatles affiliate Klaus Voormann on bass, matches Simon all the way, dipping in and out of her lyrical moods.

These factors are part of the reason why the song worked as well then as it does now, but it’s the enduring mystery of its subject that has given it an extra dimension for the past 50 years.

‘All the girls dreamed that they’d be your partner’ 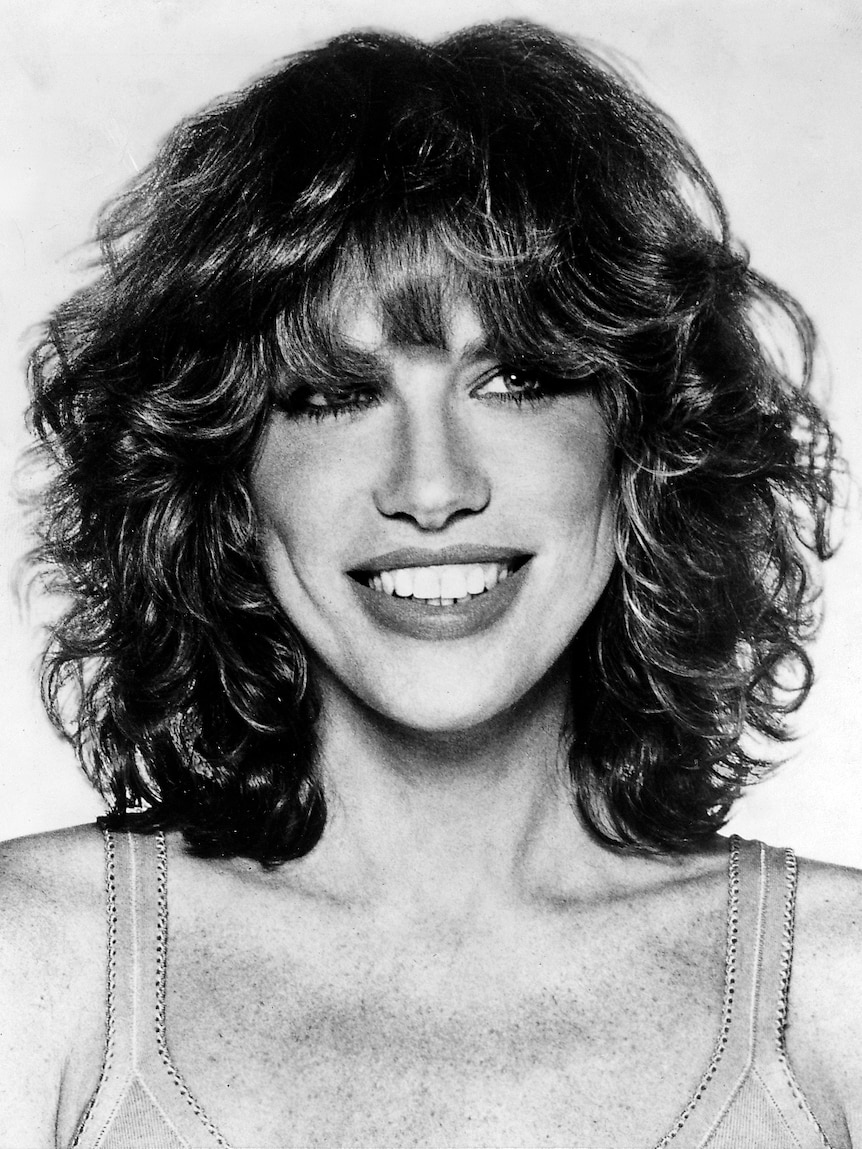 The puzzle of who the song is about has been both deflected and fed by Simon from day one.

According to Vanity Fair, Simon told an interviewer prior to the song coming out that You’re So Vain was about “men” as opposed to “a man”, and later admitted that certain aspects of the lyrics were based on certain men, but not the whole.

But she has also played into the idea that it’s a singular man time and time again. In 2009, she told a New York radio station she had hidden the name of Mr So Vain in a new recording of the song (more on that later), while several people, including Taylor Swift and radio show host Howard Stern, claim that Simon has revealed the subject’s (singular) identity to them.

And then there was the auction.

In 2003, the president of NBC Sports Dick Ebersol was the winning bidder at a charity auction, paying US$50,000 (about AU$125,640 in today’s money) for the privilege of having Simon tell him who the song was really about.

One of the conditions of the prize was that Ebersol wasn’t allowed to reveal the answer, though at the time he shared a clue that Simon had already shared with him — that the man’s name had the letter “e” in it.

Over the years, Simon has also added an “a” and an “r”, seemingly confirming that the whole song is about one particular guy.

Yet she’s also contradicted this by revealing who the second verse is about, while specifically saying that doesn’t mean the whole song is about them, therefore re-opening the whole “multiple guys” theory.

So who the hell is it about?

‘I bet you think this song is about you’ Of these names, Simon reportedly dated Beatty, Nicholson and Kristofferson, was married to Taylor, and shared a relationship of unknown status with Jagger, all of which has helped fuel the myriad theories.

But let’s dig a bit deeper into some of these suspects.

Geffen was the head of Asylum Records when Simon’s hit song was released on then-rival label Elektra, but his name really only came into the mix when Simon released a new recording of the song that supposedly contained the answer to the puzzle as a back-masked whisper.

The internet went wild when people claimed to find the name “David” hidden in the recording, which was both confirmed by Simon’s people and denied by Simon herself, throwing more confusion into proceedings.

David Lawrence Geffen also had all three previously released letters — “e”, “r”, and “a” — and the British tabloids ran rampant with the theory.

However Simon’s ex-husband Jim Hart said it wasn’t Geffen, as did Simon’s publicist, with Simon herself later admitting she didn’t meet Geffen until after she had written the song. This theory seems to stem from the fact Jagger provides uncredited backing vocals on the song because “he happened to call at the studio”.

David Bowie’s first wife Angie Bowie fuelled the rumour, noting that she was the “wife of a close friend” mentioned in the lyrics and that Jagger was obsessed with Simon, though the nature of Simon and Jagger’s relationship is unclear, with Simon writing in her 2015 memoir that “they couldn’t have each other”.

Coupled with the fact Jagger also has the three previously released letters in his name, he seemed a likely candidate.

But some “Carly-ologists” have dismissed him, saying it’s ridiculous he would sing backing vocals on a song that disparaged him so heavily unless he a) didn’t know it was about him or b) he didn’t care and thought it might be funny.

However, Simon put the notion to rest way back in a 1983 Washington Post interview, where she flat out denied Jagger was Mr So Vain.

Though one of the lesser-known names on the list, Armstrong is definitely the subject of at least one Simon song.

The track “Dan My Fling” on Simon’s first album is dedicated to their romance and her subsequent heartbreak.

The name “Daniel Armstrong” features “a”, “e”, and “r”, further fanning the rumour, and while he’s never been fully ruled out, the fact that Simon has fully admitted he’s the inspiration of another song seems to make it unlikely she would keep his presence in this song a secret.

Still, some in Simon’s camp have hinted that the subject of the song isn’t famous, and in comparison to other names on the list, Armstrong is one of the least well known. The “David” clue sent people scurrying in search of Davids that might fit the bill, with some landing on Bowie.

Bowie toured America a couple of times in early ’70s, and theoretically he and Simon could have crossed paths, but it’s a long shot.

Plus, even Bowie’s first wife Angie didn’t think it was him — she was busy pointing the finger at Mick Jagger.

Simon met folk star Taylor in April 1971 — around the time the song was written — and the pair were married just days before the single was released.

They soon became a high-profile couple, and Rolling Stone magazine noted in a 1973 interview with the pair that the popular consensus at the time was that Taylor was the subject of You’re So Vain.

“No, it’s definitely not about James, although James suspected that it might be about him because he’s very vain,” Simon joked in the ’73 Rolling Stone interview.

“No, he isn’t [vain] but he had the unfortunate experience of taking a jet up to Nova Scotia, after I’d written the song.

“He was saved by the fact that it wasn’t a Lear [jet, as per the lyric in the song].”

Some people still think Taylor is the one, and that Simon only denied it because they were married and sitting next to each other during the Rolling Stone interview.

But the number one suspect is Beatty, whose not-so-secret life as a Hollywood lothario was just as well known as his cinematic exploits in the ’60s and ’70s. Remember that thing about people hearing the name “David” whispered in the more recent re-recording of the song? Some people swore they heard the name “Warren” whispered as well, and his name has all three previously revealed letters.

“He certainly thought it was about him — he called me and said ‘thanks for the song.'”

In 2015, Simon admitted the second verse was about Beatty, adding “that doesn’t mean the other two verses aren’t also Warren”, but, as usual, she stopped short of confirming he was Mr So Vain.

‘One eye in the mirror’

So will we ever know the truth? It’s hard to say. Simon seems to enjoy the game, hence the auction and the letters and the back-masked whispering, but she appears acutely aware that the mystique is a massive part of the song’s allure.

If she takes that away, will it take some of the shine off the song?

For Simon, who’s now in her late 70s, maybe it’s a case of keeping Mr So Vain himself guessing. Why spoil the fun now?