Hallowed Be Thy Game: Brütal Legend is a Love Letter to Heavy Metal 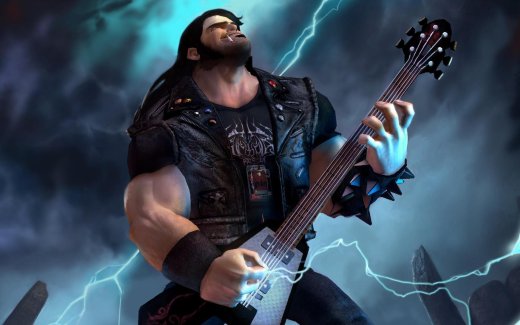 (Editor’s note: Let’s face it — most metalheads are a buncha nerds. To that end, Hallowed Be Thy Game is a weekly feature here on MetalSucks where we’ll highlight some of the metal-as-fuck board/video/tabletop role playing games we’re playing or have played in the past.)

As a lifelong gamer and metalhead, there have been very few moments where the Venn diagram of both those passions became just one circle. Sure, some games can be metal, but very few actually are metal. Few speak to our unmitigated love of the music — in fact, few developers even really understand what heavy metal is and what it means to people like you and me.

So when Tim Schafer (no relation to Jon Schaffer) and his company Double Fine Productions announced they were making an video game that paid tribute to heavy metal in all its forms, I was stoked. When Brütal Legend finally came out back in October 2009, I was excited but unprepared for just how metal a video game could actually get.

For those that either weren’t around or weren’t aware, Brütal Legend was looked at by non-metalheads as just another action/roleplaying game in an era where there were so many third-person action RPGs. But this one was different. In this game, you take on the role of a battle-vest wearing, mullet-sporting, cigarette-draggin’ roadie named Eddie Riggs, who’s voiced by Jack Black. The dude longs for the days of old school metal but is stuck handling the on-stage goings on of what sounds like a horrific nu-metal band called Kabbage Boy. It’s just… bad.

Luckily, we’re not subjected to their music for long, as the band is killed in an on-stage incident and an unconscious Riggs is transported to a magical world where heavy metal reigns and every vista is fit for an album cover.

Right from the get-go, you’re hit in the face with the biggest and most important aspects of this game — the soundtrack. The first time you gain control of Eddie Riggs, you’re tasked with killing a buncha murderous cultists. That’s nothing new in a game like this, but what is new is the fact you’re doing it to “Children of the Grave” by Black Sabbath.

Throughout the entire game, you’re never too far from hearing a badass metal tune. As you drive around the wasteland, you could be jamming out to “Am I Evil?” by Diamond Head one minute and then the next moment you’re tearing it up while “This Spake The Nightspirit” by Emperor blares from your TV screen. The soundtrack is extensive, covers multiple decades, and spans so many sub-genres of metal. It’s obvious that only a metalhead like Tim Schaffer could have come up with the track list because it’s so meticulously put together.

Getting back to the game, Riggs slays demons, teams up with headbanging warriors, and meets some interesting characters to aid him on his quest to help destroy the demons that plague the land. And that’s another area where the game shows its love for metal on its sleeve. Some of the most important characters are voiced by some of the most important people in metal and rock. We’re talking Lemmy Kilmister, Lita Ford, Ozzy Osbourne, and Rob Halford. Hell, Halford voices two characters. It’s such a trip to speed into a lava filled area in your souped up hot rod only to be face to face with a digital likeness of Ozzy a second later.

And while the second half of the game kinda goes off the rails a bit with a sudden shift in gameplay, Brütal Legend never loses sight of the metal. I could go on and on about the plot, the characters, the music, the scenery, really everything, but it’s just easier if you check it out yourself.

Brütal Legend is available on Xbox 360, Playstation 3, and PC via Steam and other online marketplaces. It’s also on Xbox Game Pass for consoles, so no reason to not give it a try if you’re a subscriber!

The post Hallowed Be Thy Game: <em>Brütal Legend</em> is a Love Letter to Heavy Metal appeared first on MetalSucks.

When I came to Lynx Entertainment, I’d nothing- Kuame Eugene shares grass to grace story » GhBase•com™