IT WAS THE perfect birthday present for Kyra Carusa.

The US-born Republic of Ireland striker celebrated turning 27 with her second goal in green, rounding off a 4-0 win over Morocco in Marbella.

Monday’s rather forgettable international friendly rounded off a simply unforgettable 2022, which yielded historic World Cup qualification for the Girls In Green.

In their 10th and final game of the year — their eighth win and sixth clean sheet in-a-row — Carusa was sprung from the bench in the 61st minute. 17 minutes later, the HB Køge captain had the ball in the back of the net. Her excellent glancing header after a sublime Áine O’Gorman cross wrapped up the victory, and capped a lively cameo.

“There were two birthday presents I wanted,” she smiled afterwards. “I wanted a win for Ireland and if it happened to be that I got a goal in that too, I’d say that was my second wish.”

The goal was a thing of beauty. In the build-up, one thing ran through her mind. “I just remember we talked about getting to the near post as quickly as possible and that early ball in.

“I swear I looked at Áine and said, ‘Near post,’ and sure enough it came right at my head. So it was a gift from her and I was happy to see it go in the back of the net. Very exciting.”

Unquestionably made more so after a stop-start few months due to injury.

Carusa missed out on a string of games due to a stress fracture in her femur, and returned to the set-up just in time for last month’s monumental play-off win over Scotland.

This was her first appearance since the Pinatar Cup in February.

“It’s devastating when you are not around, especially with injury,” she reflected. “It’s hard, it’s difficult mentally, physically and emotionally. You know what it’s like to be in camp, you know the team that goes into camp, and you still feel like you are there, a part of it, just from the outside.

“But you are biting at the bit to be able to step in and take an opportunity to really solidify yourself in the group and get back and be healthy. For my birthday there is nothing more that I could ask for than, A: be healthy and buzzing and doing well and, B: putting the ball in the back of the net.”

The San Diego native, who declared for the Girls In Green amidst Vera Pauw’s tenure and made her debut in March 2020, is relishing the competition for seats on the plane to Australia next summer.

Monday’s audition was a successful one, and she hopes she can impress Pauw and continue contributing to the team in 2023. 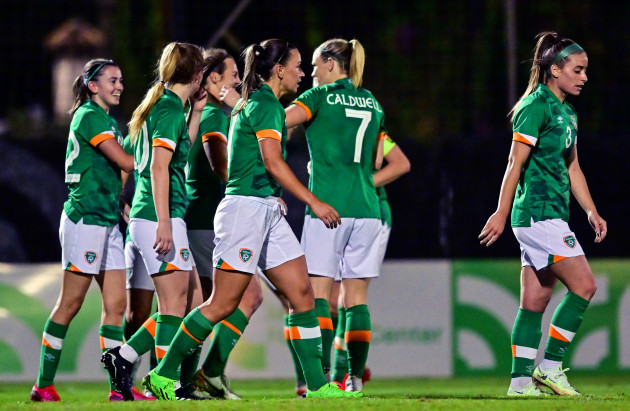 “Both of those things, fighting for places and to impress our staff too and to really show a variety in our attack as a team,” she nodded.

“This was a game where we really wanted to see a different side of us as a team, and to see our limits and how we could build differently. Beyond that, as a player, I could show a lot of different sides to our offence and it was successful, which I was excited about and happy to see that the team could really be so flexible and be diverse and mix up that kind of attack. So it’s cool to see that we are building up to the World Cup.”

“What makes our team, specifically with Ireland, so special is that we have incredible talent that can be showcased in so many different ways,” she added. “We have individuals obviously who are special.

“But as a team, our mentality and our work ethic together coming into camp is unmatched. I am so stoked that I can be part of that variety that we can bring and surprise teams and challenge teams to have to figure out what kind of Ireland they are going to have to play against that day. It’s cool that we can be successful in so many different ways.”