How To Use Neopronouns, According To Experts & People Who Use Them 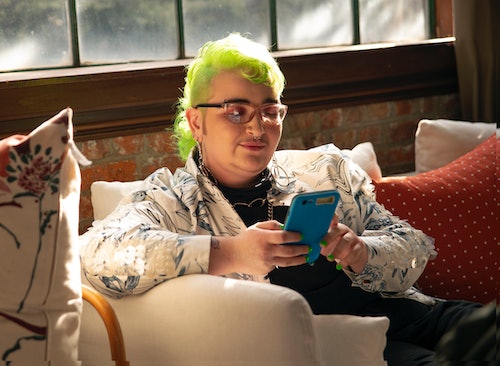 Figuring out what pronouns fit you best can be a journey — and that’s before telling your parents, friends, and colleagues about them. People who use gender nonspecific neopronouns like xe/xem/xeir and ze/zir/zirs may find others in their lives asking them to explain their pronouns more often than not. (By the way, those neopronouns are usually pronounced zee/zem/zeir, rhymes with hair, and zee/zer/zers — just sound it out.)

“Using pronouns other than ‘he/him’ or ‘she/hers’ can be an essential part of many trans and genderqueer folks’ mental health and social well-being,” says S. Bear Bergman, the publisher of LGBTQ+ children’s book press Flamingo Rampant and co-editor of Gender Outlaws: The Next Generation. Using multiple pronouns (such as both “they” and “he” pronouns) or neopronouns like hir/hirs (usually pronounced like “here/hears”)can be “a way to give people some room around their own gender identity; a way to help people feel more comfortable or confident; and a clear indicator of what pronoun is never acceptable in relation to them,” says Bergman.

You could probably guess from the makeup of the word “neopronoun” itself what the word means: new pronouns. As Blossom Ruby Brown, an educator and TikToker whose content focuses on inclusive language, explains, “Neopronouns are simply pronouns that are being used by specific speech communities that may not yet be widely known by people outside of those speech communities.”

Like other forms of language, neopronouns rise up when there is a cultural need to get creative with concepts that current words are inadequate to describe. The binary pronouns “she/her/hers” and “he/him/his” only represent two sets of the pronoun possibilities people have when talking about others in English. “They/them/theirs” pronouns offer another way to refer to an individual without assuming their gender. They’re so much cooler than I am, you might think, swooning over your quiet artist classmate.

Neopronouns express a similar idea as they/them, but are intentionally created to make pronouns that feel like home. Neopronouns like xe/xem/xeir and ze/zir/zirs also allow people to refer to folks in the third person without placing them in a gender binary — Xe is such an incredible writer, you think while reading a book by a nonbinary human.

This neopronouns list is non-exhaustive; people are creating new neopronouns all the time, and many people use a combination of pronouns, too. If someone says fae uses fae and she pronouns, for example, you can ask ones which fae prefers primarily. It could be that the person wants you to alternate between using both pronouns for her pretty evenly. (Check out the previous two sentences for what that can look like.)Or it could be that fae wants people to use xe/er pronouns most of the time, with a sprinkling of she/her pronouns occasionally for good measure.

About one in four LGBTQ+ young people identify as nonbinary, and most of these youth use pronouns other than ‘she’ or ‘he’ for themselves, according to a 2021 report by The Trevor Project. Around 5% using pronouns like “xe/xim” or “fae/faer” (pronounced fay/fair), with xe/xem as the most commonly used neopronoun. The fact that more young people are using they/them pronouns and neopronouns today draws on a rich history of nonbinary pronoun use.

Some people balk at using they/them pronouns because often,they’re plural. But there’s a rich history of using they/them and others as a singular pronouns. Gender-neutral pronouns used to be the norm in English, according tothe University of Wisconsin,Milwaukee’s LGBTQ+ Center; the two existing gendered pronouns had become all but indistinguishable from each other by the twelfth and thirteenth centuries because their pronunciations had grown so similar. According to UWM, the pronoun”she” was created in the 1100s in part to acknowledge women grammatically, instead of letting he/him/his pronouns be the default for everyone.

“There’s a long history of various gender nonspecific pronouns including they/them in literature, including the works of Chaucer (in The Canterbury Tales), Shakespeare in Comedy of Errors, and Jane Austen in Pride and Prejudice,” Bergman says. Sometimes, realizing the long literary history of singular they/them pronouns helps other people recognize them as “legitimate.”

“After I came out to my mom, she called me one day just to be like ‘Honey do you know what I just realized? Shakespeare used ‘they’ for third-person singular!‘” says Tal, 39. “I was amused and kind of touched, but also like ‘Oh, OK, so my pronouns are valid now because Shakespeare said so.” But, ze says, having history on your side can help when people try to invalidate your gender and your pronouns. “Being able to say that they’ve had ‘neopronouns’ in English since at least the 1700s at least wipes the condescension off cis people’s faces pretty effectively.”

Speaking of neopronouns and Shakespeare, there’s a reason the line, “Wherefore art thou, Romeo?” sounds so archaic now. As Brown notes, “you” is a fairly new pronoun in the English language — which was first used to only represent the second person plural. “You” would eventually replace “thou,” though, as second person singular. So, “you” was once a neopronoun!

As for the rise of neopronouns, Bergman says that the history is a little more contested. “It seems like a lot of neopronouns came about because some nerdy people on the early Internet were trying to solve the singular, gender nonspecific personal pronoun problem and solved it in a bunch of different ways based on what sounded cool to them. There’s also some history pointing to the ideas that ze as a pronoun was coined to go with that early modern English hir as used by Chaucer, proving that some of those nerdy early-Internet people were English majors.”

There are neopronouns in languages other than English, too. Brown introduces themself in their TikToks in multiple languages to make this point: “If you don’t know who I am, my name’s Blossom. I use they/them pronouns in English, elle en español, et iel en français,” they typically say.

“In the case of both Spanish and French, as well as many other languages,” Brown explains, “gender is attached grammatically to the language in a way that is much more rigid and binary.” So, the Spanish “elle” and French “iel” are both neopronouns created to provide gender-neutral pronouns for “those language users to describe their experience with gender using language that did not yet exist.”

Societies that underwent colonization also have evidence of using gender neutral pronouns. “Before colonization there were many, many societies that had neutral-to-positive words and social roles for people we might today describe as genderqueer or nonbinary,” Bergman tells Bustle. For example, terms like “alyha” and “hwame” have been used by the Mohave people in North America to describe gender-variant folks, and many Native American, Aboriginal, and First Nation folks of various gender experiences remain prominent LGBTQ+ activists and artists today.

Language is about evolution, and that can happen across broad swaths of the Internet through Tumblr or in IRL communities. Queer youth of color in particular have tapped into the potential of even the smallest words. Around 2004, for example, Black middle schoolers in Baltimore popularized “yo” as a gender-neutral pronoun to refer to other young people whose gender was unknown or for specific people being pointed out in discussion.

So really, these “new” pronouns are sometimes new, but are part of a very old tradition.

“As [today’s neopronouns] become more widely adopted, the neo will probably fall away and they will just be referred to as pronouns,” says Brown, “which they are.”

How To Use Neopronouns

Once you’ve learned about neopronouns, you might feel like they’re a better fit for you than what you’re using now. “I had already come out as using ‘they/them’ pronouns,” says Justin, 32. “I was really scared to say, ‘actually, now can you use ze/zir for me?’ But at the end of the day, it’s about learning more about myself and about language — I will always love ‘they/them’ pronouns, but ze/zir feels more like it was made for me. And after everything I’ve been through with my gender, I deserve something shiny and just for me and other people like me.”

If you’re thinking of trying out neopronouns, but aren’t sure where to start, Brown recommends to just “try it out.” “Ask people you trust and know to use [a set of neopronouns] around you so you can get a feel for what it sounds like,” says Brown. If something you’re trying out doesn’t feel like the right fit, or you change your mind for whatever reason, you can always make a change that better suits you.

“The language we use to help align us with our movement through the world with gender does not have to be final,” Brown explains, “As a trans person, the language I use right now is what feels best for me, but I recognize that might change in the future, too, as I find more nuanced language or language that might not yet exist to describe how I experience gender.”

If you’re seeking to learn a new acquaintance’s pronouns, or someone you know has started to use a new set of pronouns, Brown believes that having an open dialogue about pronouns is best. “I always say, introduce your own pronouns first,” they explain. “If someone tells you they use multiple pronoun sets, like he/ze pronouns, you can always follow that up with, ‘Do you like that people switch between those pronouns? Or that we use one set in certain situations and another set in another?’”

Using someone’s pronouns isn’t just something to do in front of them — it’s something to do every time you talk about them.”It’s cool if you’re not sure how to use neopronouns, or if it takes you a second to get it right,” Tal says. Just swap them into a sentence as you’d use any other singular pronoun.”Practice, practice, practice. Write in your journal about your latest adventure with your friend who uses xir pronouns; talk about xir in the mirror to yourself; if xe’s given you consent, use xir pronouns in conversation with other people. It’s really not all that hard if you don’t want it to be hard.”

Even if someone’s first instinct is to say that singular they/them pronouns are “confusing,” Bergman points out that people actually use them all the time. “We very naturally use they/them as pronouns when we don’t know the gender of the person we’re referring to,” Bergman points out. “It’s very common to say, ‘Oh, look, somebody forgot their hat!’ It’s much less common to hear someone say, ‘Oh look, someone forgot his or her hat!” Think about taking this attitude when your friend tells you ze’ll be using ze/zir from now on.

Pronoun variety isn’t about imposing on anyone, Tal says. It’s about celebrating everyone. “I’m not trying to take away your amazing binary pronouns or your they/them pins. Whatever pronouns work for you are brilliant and amazing, and I’m happy that you have them. But I’m happy with ze/zir because these were the first pronouns I heard that were like, ‘Aha, yes, that fits me.’ My neopronouns expand my world and celebrate my own gender while shaking up violent gender assumptions, and that’s really what it’s all about.”

Universal Credit explained: How to get one-off payment worth up to £812 to help pay bills

How to Get Rich Investing in the Stock Market