Kinzinger Trashes Trump For His Call To Abolish The Constitution 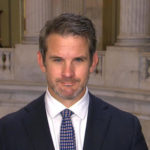 As Donald Trump continues to push the Big Lie on his social media platform – the lie that says Trump actually won the 2020 presidential election but it was stolen from him by Democrats, Republican governors and secretaries of state, election officials, poll workers, a vote tabulating machine company, Italy, and a long-dead president of Venezuela – his latest posts have been more than troublesome. Trump, leader of the party who insisted that gay rights couldn’t be passed because they’re “Constitutional originalists,” called for the termination of rules in the U.S. Constitution that prevents him from reinstalling himself as president. Most Republicans have remained silent.

Adam Kinzinger, who sits on the House Select Committee investigating the January 6, 2021 attempt to overthrow the government because Trump wasn’t reelected, is not one of those Republicans. Kinzinger called out Trump’s post, saying that conservatives can’t be Trump supporters, and Trump supporters cannot call themselves conservatives.

The twice-impeached ex-president who lost the popular vote twice and tried to stage a coup is running again in 2024. Should he win, the country will be in serious peril, but his GOP allies will continue to support him because they want to hold onto power, too.

Twitter had many comments to make about Trump’s admission that he has no respect for the Constitution. Although Trump’s supporters were incensed that Kinzinger called him out, Twitter was largely supportive of the representative’s statement. Read some of their comments below:

The post Kinzinger Trashes Trump For His Call To Abolish The Constitution appeared first on Bipartisan Report.

Previous article“That’s It, I’m Craft Shaming”: 83 People Share Crafts So Bad, They Just Had To Shame Them Online
Next article5 Must-Have Digital Marketing Services For Your Business